Based on the recent thread about GC3 I am about to order Qolsys IQ Panel 2+ (345MHz Verizon).

I have a few questions to understand whether / what actions I should take when it arrives.

Will I be able to reuse the power supply from GC3?

No. You can reuse the cable but not the power supply. Just swap the panel and power supply at both ends of the cable.

The way you guys sent GC3 5 years ago was really great with all the sensors preprogrammed in it. Will IQ Panel 2+ come in the same way?

No, sensors would need to be programmed locally into the new panel. This thread goes over programming for the 345Mhz version of the IQ Panel 2+.

My garage door works over MyQ, it seems that it is supported but want to double check.

MyQ devices would not be affected by a panel swap. In fact the Qolsys panel has additional integration in that you can access and control the MyQ doors from the panel screen.

I have FE599NX lock that is currently connected and works with GC3 via alarm.com phone app. Will it still be the case?

It might not. Older Schlage lock design makes them incompatible with 700 series Z-wave radios per ADC. Alarm.com only officially supports BE468 and BE469 models manufactured December 2019 or newer.

I am quite excited about “Built in Glass Break Sensor” that IQ Panel 2+ comes with. How does it deal with thunder and glass breaking while in “Arm(Stay)”?

It is programmed as a sensor by enabling it in the installer settings menu. You can select a sensitivity level to help avoid false alarms and you can select whether is activates in away mode only or in stay and away as a perimeter zone via the sensor group.

I’m not 100% on what you mean by slow. Do you mean they don’t report when you trip them right away?

In general wireless motion detectors do not report nonstop when triggered. There will be a roughly 3 minute reset when no motion is occurring before it will trigger again.

PowerG motions will have better signal range and encryption. It is common for users to slowly replace sensors that are causing trouble with PowerG as they go.

It is a little more expensive, but the only non-price difference is the radio. And the cost of replacing sensors or getting a translator is higher than the panel difference.

There is no real reason to get a panel version that doesn’t support your current sensors unless you only have a couple sensors.

What would be a serious of high level steps to swap GC3 for Qolsys IQ Panel 2+ (345MHz Verizon) once it arrives?

Thanks @jwcsurety, this is really helpful!

One thing I am unsure about is Schlage FE599NX. it does currently work with alarm.com (via GC3), but you are saying that there is a high chance that it’ll stop working because IQ Panel 2+ uses a different (700 series) zwave radio?

If that is the case, what would be another, great lever zwave lock I can get which would work?

The reason I am looking for lever is because I do have a separate, not smart dead bolt lock, and also the door does deform depending on the humid / temperature and the deadbolt would not automatically work: it needs pulling or pushing the door depending on the season.

To clarify, you may still be able to connect it, it is not fully supported though, and certain features will not work. I believe one of the primary differences is the lock cannot report the user who opened it. So user-based automation and notifications would not work. Functionality takes a hit and Alarm.com cannot support the device or provide troubleshooting.

You can find a list of Alarm.com supported z-wave devices here. Levers are included in the list. 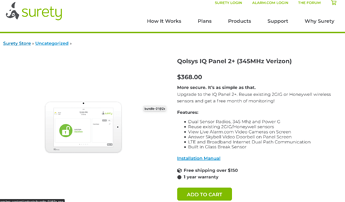 when I click “add to cart” it goes to another page that looks very similar, with an “add to cart” button, but with an additional checkbox to add subscription: 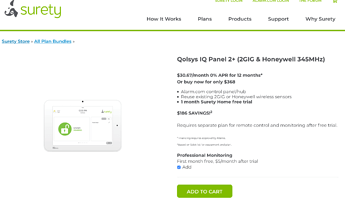 I am pretty sure two panels is not something I am looking to buy, at least right now, and I do already have the subscription.

I can x out one of them and continue. which one should I x out, and/or maybe there is a different route I should take to get the panel?

The first link is the one you want. When you click add-to-cart it reloads the page and redirects to the bundle, but just the panel itself will be in the cart. You can just remove the bundle version from the cart.