I have a IQ2+ panel that I bought 2 years ago that worked great for the first year and a half, but is now having problems. It started with the screen just turning black one night (while armed still showing a red LED) but unresponsive. I was able to power down the unit, but when powered back up the screen was fuzzy, dim, and double imaged. It would work, but after about 2 weeks it went black again and I would get a message that the panel was offline. I can reset it by powering it down, but it always comes back fuzzy again and will eventually lose signal and go black. I have replaced the battery and am using the supplied power supply. Can I try to update to an older firmware to get it working again? The system was on auto update and I see others may have had issues with similar effects.

A double image has been reported before, but most troubleshooting has only resulted in temporary success.

I have a ghost image on the main panel display, shifted horizontally, and it vibrates. Panel is usable, but barely. Same situation as this thread: Screen image split - Qolsys iq panel 2 I have had this installed for about 3 years. My panel version and firmware is: Qolsys IQ Panel 2 firmware 2.5.2-ADCS 7.15-ADCL 7.15 I have rebooted, powered down, and currently in power down, unplugged, battery removed. Will power back up and re-check in about 15 more minutes, but really expect that this i…

You cannot revert to older firmware on a Qolsys IQ Panel 2. However, that would not be the issue here.

You actually have old firmware. 2.4.2 is the version it looks like your panel is reporting to Alarm.com, which is about 3 years old.

It would be recommended to update using the instructions here:

IQ PANEL 2 & 2 PLUS - 2.7.1 SOFTWARE UPDATE Release Notes: Fixes/Improvements: • Fixed an issue where sometimes the cell connectivity path isn’t re-established after a panel software upgrade. • Addressed a use case where PowerG sensors could unexpectedly remain “Not Networked” after a panel reboot or panel software upgrade. Update Instructions: Compatibility Note: Your IQ Panel must be on software version 2.0.1 or higher and connected to Wi-Fi to install this update wirelessly. Panels ru…

Additionally, try powering off the IQ Panel for an extended period of at least 20 minutes. After booting back up is the image normal?

OK, so did the update and the screen is showing, but now it is stuck in this loop where is is fine for a second then goes crazy over and over. See video below for clarification. 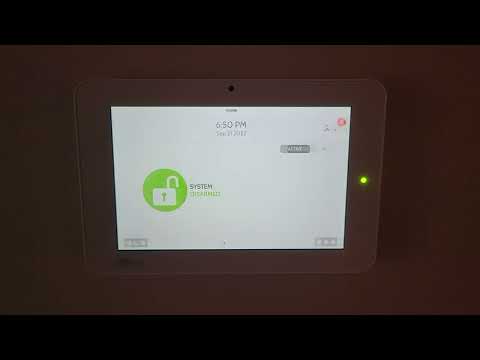 Did you try the additional step of powering off the IQ Panel for an extended period of at least 20 minutes. After booting back up is the image normal?

Yes, I did that before updating (sat for an hour) and it rebooted like it had been before the update (fuzzy, dimly lit). The battery, and power transformer where tested with a multimeter and are within appropriate range.

Alright, unfortunately this is probably indicative of a hardware issue and not likely fixable. In most prior reports a replacement panel was necessary to resolve the issue.

The panel should be able to be used through an IQ Remote or via the Alarm.com app normally, but access to the panel and a usable screen is important for programming, and local alarm system control.

I would recommend a replacement panel as a resolution to the issue.