I am a computer guy and tech myself and I have been trying to no avail to get the Qolsys IQ2+ Panel to Auto Learn multiple ADC-300-LP Image Sensors but no dice, here are most of the steps that I have tried so far…

Using the Qolsys IQ2+ Panel I switched out the Power G daughter card for the Qolsys Image Sensor Card and then tried to autolearn the ADC-300-LP Image Sensors by removing and replacing the batteries to resetting them to no affect.

After trying this over a long period of time with no success, we tried adding the ADC-300-LP Image Sensors into the Panel by using the mac addresses… And while this did add them it only went as far as showing them in active mode, but not the idle mode that they need to be in to work and then all of the image sensors showed failure after not communicating with the panel.

After this we tried replacing the Qolsys Image Sensor Card and IQ2 Panel but still no dice, I have tried autolearning the image sensors at different distances from the panel and with even with other electronics shut off but still nothing.

Other than what has already been tried is there any other possible insights that might resolve this?

The Image Sensor would be compatible with the Image Sensor daughtercard installed and working (needs to be connected to the same antenna used for powerg). The Image sensor counts toward sensor limits, so if you are at 128 sensors already you won’t be able to add one.

If you go into Settings > Advanced Settings > System Tests > Daughtercard tests, what do you see when you run that test regarding the Image Sensor card?

IS daughter card test is always Pass, the whole situation is weird, I have never seen this before, usually these systems are johnny on the spot with the ammo quick and its a done deal but after multiple panels, IS daughter cards, etc idk…Thanks

What firmware is the panel on?

The panel is updated to the latest firmware, checked multiple times over even…

Probably irrelevant, but be 100% sure you have the ADC-300-LP. If you have a 2GIG GC2 version of the Image Sensor it will not work with any other panel.

Yeah they are the ADC-300-LP, which just doesnt make sense that none of them are working, I mean its like amityville or something, lol, there is really nothing I can find that would prevent them from working with this panel.

One thing, as mentioned we were able to add them using the mac addresses and then they would show up on the panel correctly, except for the active status rather than the needed idle status…

Does anyone have any ideas as to how to change the status from active to idle, we tried sending them the rules to initialize them but no dice and when I tried to test them using the IS Config it said unable to initialize?..

So apparently this is key to getting them to work I suspect, but noone seems to know how to accomplish that unfortunately…

I’m not aware of causes that would render auto-learn to not work or require manually adding mac address.

Fully resetting the image sensor would be necessary if it was previously tied to a panel. Beyond that, it sounds like you may be identifying yourself as a dealer or installation tech, is that correct? (I don’t see a related Surety subscription)

If you are a tech, I would recommend contacting the manufacturer Qolsys and providing them with your panel IMEI so that they can assist.

If you use Surety as your Alarm.com provider using a different name, send us a PM with the account name and service address of your account and we would be able to send your panel logs to the manufacturer for review.

No I am not a ‘dealer or an install tech’, just a lot of experience with computers and electronic security equipment and have never seen anything like this before, have already talked to Qolsys at various times and there was no solution…

Mind posting a photo of the inside of the panel and the IS daughterboard?

Sorry for thread-jacking, but was there any resolution to this? I’m having the exact same problem with the three ADC-IS-100-LP that worked flawlessly on a Simon XT (yes, I deleted them from the Simon before trying them on the Qolsys). The panel is at the latest SW version 2.6.2. FWIW, I’m attaching the image of the daughter card I replaced the Power-G one by. 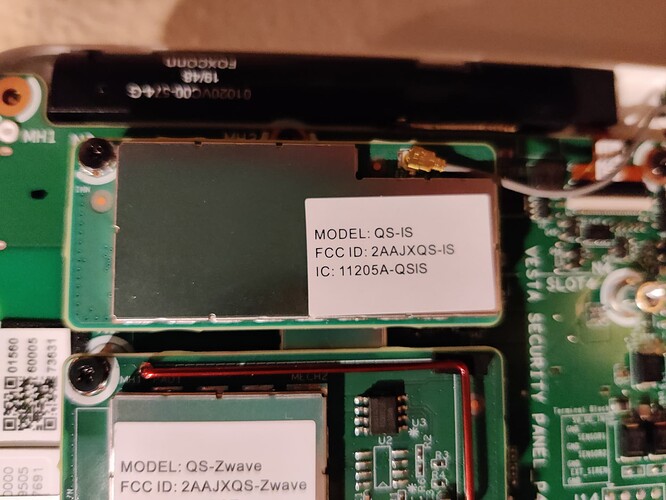 Deleting zones on the Simon won’t allow the IS to be relearned. They would need to physically be reset. See below:

I’ve seen all of those. I have pushed the paper clip in several times for between 5 and 20 seconds.