I’m looking to protect a glass sliding door in a bedroom. The issue is that it has a heavy blackout curtain covering it. I understand that the effectiveness of a glass break detector is greatly reduced by such coverings. Are there any other options or does anyone have suggestions?

Looks like this is for a 2GIG panel, correct?

A 5150 piezo shock sensor wired to a DW10 or RE201 would be ideal in this case. The shock sensor mounts 1 inch in from a corner of the glass (on the glass itself) and is self-powered. It simply is then wired to the inputs of a wireless transmitter, which can also be used for its magnetic reed switch, giving you an open/close and glass-break sensor.

Yes, a 2gig panel. Thanks Jason.

Certainly. Here is a video showing the programming of one:

If the DW10 is already programmed on the Go Control panel, do I need to make any changes to it’s prgraming or just add the 5150? Thanks.

The programming video above shows the necessary steps.

The wired input is learned in as an additional separate sensor zone in programming using loop 1.

Sensor programming step by steps can be found here for the 2GIG panel.

Following up…installed two of them yesterday. Used DW10s and 5150s. The only thing that was different was that the DW10 would not go into learn mode with the wires connected. Other wise all good. Thanks!

The only thing that was different was that the DW10 would not go into learn mode with the wires connected.

Ah if the sensors were already learned in and using their reed switch they would not learn by tripping the loop 2 reed switch. (it would already exist as a sensor in programming) By “Trip sensor” you would want to trip the sensor you intend to use, in this case the shock sensor, which will transmit as loop 1. The serial number can of course be manually typed as well.

I’m setting up a new pair of these on a GC3 panel. Is the setup the same? Under wireless sensors?
Thanks!

Thanks Tyler. I actually found your video on YT demostrating the GC3. Having said that, I cant get either one of the piezo to trip for testing. IF I tamper the DW10, I get a notice for it, but just cant trip them. Any tricks to this? I dont remember having issues triping them at my last house. Thanks.

What have you tried so far? The other shock learned in fine? I like to put the piezo on a flat surface and tap it with the handle of a screw driver. You’ll want to make sure that the shock is wired properly as well.

Yes, it seemed to learn fine. See attached pic. As far as trying to trip it, I gave it a couple of good whacks with the handle of a screw driver on a table top. 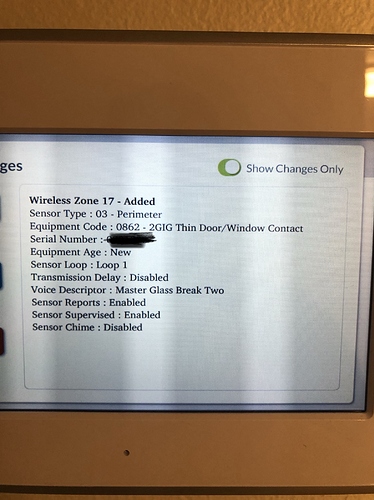 It can take a few tries to get the right vibration to learn in. These are new piezos correct? (not associated with the GC2 above)

And the piezo is wired correctly into the DW10? Have you tried swapping the piezo you know works into the other DW10? This would rule out an issue with the DW10 Aux terminal to help isolate the issue.

Yes, new piezos. Not associated with any other panel.

Is there a specific way to wire these in? I see the piezo’s strands are different color, but there are no markings on the DW10 lead.

I’ve done alot of soldering over the years so I’d guess it’s not the issue, specially twice

No, polarity does not matter connecting them to the DW10.

The best way to test sensors is to test under normal alarm conditions. Place your account on test mode with the central station if you have 24/7 monitoring, and then arm your system.

Trip the sensors by tapping with the screwdriver handle on the pane. If the sensors learned in via activation this way and are programmed as Loop 1, you should have no problem activating them.

Good to know on polarity.

Can’t remember the exact sequence but it’s with the the “walk test”. I’ll check when I get home. Hopefully thats the case.

Yes, Sensors Test and Walk Test are the same function.

Is learning the sensor by tampering the DW10 different than learning it by triping?

The process is functionally the same. You just need to make sure you select the correct loop number for that sensor.