I got woke up this morning by a false alarm from a window sensor tamper. I have an IQ Panel 2 and the sensor is a Qolsys QS1135-840 IQ Mini-S. There was no evidence of a tamper, nor any weather that might contribute to a false tamper. Then this afternoon (with the panel disarmed), the same sensor sent several more tamper alerts.

The sensor is securely mounted on the window frame with the provided double-sided tape. The cover is secure. There isn’t anything in the vicinity to hit or knock the sensor. I’ve had this system for about two and a half years and never had any other problems with it.

Is this common? Is it more common after the sensors are a couple years old? Should I expect my other sensors of the same model are going to start doing the same thing? What typically causes this? Anything I can to do minimize the chance of this happening again?

If you have a voltmeter, I would recommend checking the battery inside of the door sensor. I also have an IQ Panel 2, but am using the recessed ION Plunger-G sensors. I had a battery die during the middle of the night and the panel went into an alarm state…at 4am in the morning.

Once the sun came up, I checked the battery and it was below nominal voltage. You may want to check the battery just to see. It’s more than likely a weak battery.

Sorry for the frustration!

The first thing I recommend is to open up the sensor and physically inspect the tamper switch. Is there anything visibly wrong? Is it loose?

If the tamper switch appears to be fine then I would check or replace the battery. A low battery should send a low battery signal, not a tamper, but I’ve heard of cases where a low battery did cause a tamper signal.

I just checked the batteries, both are at 3.03 V. They’re labeled as 3 V so I don’t think that’s contributing to the problem.

Is there not a “low battery” signal sent to the panel and corresponding message when sensor batteries need to be replaced? I’ve assumed that’s a thing, but I’ve never had a sensor with a low battery, so I don’t know. Sounds super inconvenient if the low battery notification is your alarm going off at 4am!

I took it apart and everything looks fine. The tamper switch depresses and springs back like it should, and the tab that depresses the tamper switch is in place where it should be. The sensor still sends open/close signals, and it sends a (not false) tamper signal when I open the sensor and an end of tamper when I put it back together.

In my situation, my sensor had a battery that was a 2.71vdc, well below the 3vdc nominal that the coin cell battery indicated.

in my situation, I’m technically using a sensor that Qolsys doesn’t advertise support for. The iON Plunger G sensors are 319.5mhz frequency and were installed in the house when we moved in with an older Simon XT panel that I promptly ripped the hell out. I’ve wondered at times whether the sensor sent a tamper instead of a low battery…

To avoid 4am wakeup calls in the future, I’ve made a habit to simply start swapping batteries on a yearly basis. I honestly lost track and it was more than 3 years old…

With the dual batteries Qolsys advertises that this sensor has “up to eight years of battery life.” They recommend replacing the batteries every five years. But if this happens again with another sensor I’ll probably just go ahead and replace all the batteries as a hopeful preventive measure.

It shouldn’t happen again with this sensor. I’ve moved it to Group 25 in hopes of not being awaken by another false alarm tonight.

I think we’ll need to discuss with Qolsys. Do you mind if we follow up with you tomorrow on this?

It looks like you’ve already changed the sensor type to non-reporting so it shouldn’t cause an alarm tonight. If you don’t mind, I’ll also disable tampers from sending signals to the monitoring center until we get this figured out.

Could you post a photo of the sensor as it is on the window while closed? 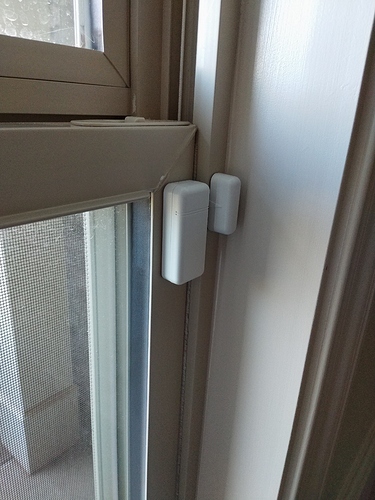 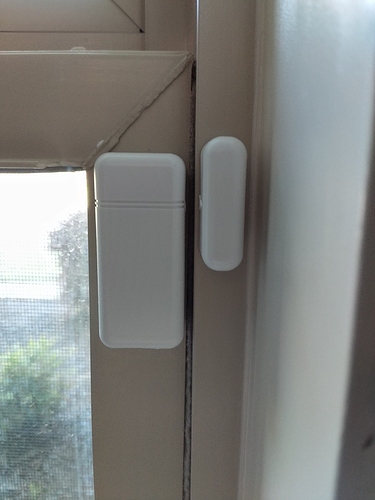 Hmm, well I don’t see any issues at all with installation, and if you did not use the optional tear-away tamper screw mount inside there shouldn’t be a reason for a tamper.

The iON Plunger G sensors are 319.5mhz frequency and were installed in the house when we moved in with an older Simon XT panel that I promptly ripped the hell out. I’ve wondered at times whether the sensor sent a tamper instead of a low battery…

There is actually precedent for this, though I wouldn’t expect this in other cases: The older Resolution Products RE111 Mighty Mouse window sensor would send tampers instead of low battery when a low battery occurred.

Note that disabling tamper reports to the CS won’t actually stop tamper alarms if they occur, changing the sensor type to non-reporting will do that though.

I’ve reached out to Qolsys to see if they have any known issues with any production runs of that model of sensor, or any known firmware issues.

We’ve received one other report of an IQ DW Mini recently that sent tampers at odd times with no discernible cause. They were also using IQ Panel 2+ firmware 2.4.2. I think it would be good to be sure to upgrade to the latest available version.

There is no known issue like this according to Qolsys. If you notice repeated tamper alerts from a single DW Mini, Qolsys believes it would likely be a damaged or defective sensor.

I would try firmware first, but replacing the sensor would be the next step it sounds like.

Updating to the latest firmware now. Regardless, I think I’ll go ahead and replace the sensor. I’m just hopeful this is an isolated incident and not something that’s going to start occurring with my other sensors.

Does Qolsys have any interest in this sensor for failure analysis? I’d be glad to send it to them if they’ll provide a shipping label.

I don’t believe so at this time, but it might be good to hold onto it just in case.

It is unlikely you would see other sensors behave this way unless it actually is an issue such as reporting tamper instead of low battery. That is much less likely.

I’m a little late to the party, and quite frankly I’m very glad to find this thread.

I have a friend with an IQ2 and the same sensor mentioned in this thread, along with his next door neighbor with the same setup. His neighbor had this same thing happen on 3 separate sensors within a few months. They replaced batteries to no avail, then replaced the sensors.

I just received call of someone in a town an hour away (for service) who had 2 of the sensors do the exact same thing. Tamper after about a year of problem free operation. No low batteries, no physical trauma.

3 locations, each with this same symptom with the same Qolsys sensor. I’m starting to think there may be a problem with these sensors after a few months-years of installation.

Any thoughts would be appreciated.

If you are an installer and are seeing multiple instances of tamper, I would recommend contacting Qolsys and letting them know. Give them as many details as you can. If an issue exists with a production run the sooner they prove it the better. They are pretty good about issuing TSBs for widespread issues.

If you are not an installer, have your dealer report these instances with the model and transmitter id of the sensors to Qolsys.

As far as what might be happening, again I have seen an incorrect signal being sent from a different manufacturer’s sensor before, where tampers get sent instead of low battery.

Another possibly more likely possibility is a physical defect with the tamper switch on a run of sensors.

The same thing is occurring with my some of my IQ DW sensors recently. They are about 4 years old now. Checking the open-circuit voltage of the batteries will not produce a valid result and they can still read near 3v when weak. They should be checked under an equivalent load … or better yet, checked in-circuit when the circuit is fully active, looking for a voltage droop below 3v. I need to experiment with this type of testing since these sensors generate a pulsed load when they wake up to transmit a new heartbeat event. Btw, the open-circuit voltage for a new CR2032 is typically around 3.25 to 3.3v and not the nominal 3v stated.

This issue reared it’s ugly head again this morning with another false tamper on a (different) Qolsys QS1135-840 IQ Mini-S. Luckily this time I was already awake and the system wasn’t armed, but it’s still frusterating.

Has Qolsys provided any additional information on this false tamper issue, or acknowleged that it’s an issue?

Is there any way to disable all tamper signals from setting off my alarm? I still have the IQ Panel 2 mentioned in my original post.

Has Qolsys provided any additional information on this false tamper issue, or acknowleged that it’s an issue?

Not that we have seen/heard. How old is the sensor in question and how old are the batteries?

Does the internal tamper switch stick at all?

Is there any way to disable all tamper signals from setting off my alarm? I still have the IQ Panel 2 mentioned in my original post.

When troubleshooting, you may want to place your 24/7 professional monitoring account on Test Mode during troubleshooting to avoid any false dispatches.

You can do this by calling monitoring operators directly at 855-348-0367 or from the Professional Monitoring tab in the System Manager section of your Surety account.