I have 8 ADC-VC826 cameras and 2 ADC-523x cameras, along with an SVR, ADC-CSVR126. All 10 cameras are working fine in ADC app, on the website, and show up on the SVR. I cannot get them to show up on the 2gig Edge. They all appear, but go from “connecting” to “device is offline.” All of the cameras are hardwired (ethernet) to the same router that the 2gig is connected to. According to this: https://www.alarmgrid.com/faq/which-alarm-com-cameras-are-supported-by-the-2gig-edge-for-panel all of the cameras are supported by this panel.

Panel is connected to 2ghz wifi and the network tests all pass. Very strange. I am very proficient with networking… I’ve double checked all of the culprit settings I’ve found in the forums for this issue, but still, nothing.

I have tried adjusting wifi settings,

If no change after the power cycle, try powering off the SVR, reboot the panel, and try again. With the SVR powered off are they able to stream to the panel?

Still no luck. Sits on connecting and then eventually times out to “device offline.”

What model of router are you using? Do you have multiple access points or just one?

If you delete one of those cameras then reinstall it on your account, does it allow that camera to stream to the panel when you enable that?

Do not add an SVR recording schedule for it yet, the test is for a fresh camera installation without the SVR schedule.

I’ll test next week when I get back home with fresh camera and no svr rule.

To answer your router questions, my network has an att fiber router and from there a netgear unmanaged Poe switch where the cameras plug in.

still no luck. I have tried everything you asked above.

also, after doing the power cycle on the panel, it shows everything is fine including the battery, but alarm.com is reporting battery not present. not sure how to clear that.

To confirm, which camera was deleted and relearned in without connecting to the SVR? It looks like all of your cameras still have their original installation date reporting in Alarm.com. None are reporting having been learned in since the last post.

Can you confirm the name of the camera that was deleted?

If you haven’t deleted the camera yet, please be sure to delete it from your account (under settings > video device info), then wait about 20 minutes before reinstalling. Do not add the new camera to the SVR recordings. Just try streaming to the panel with it.

The kitchen one. Also, I just got a brand new one to install. I’ll install it and not add it.

I have installed the Back - N camera and the Laundry Room Door Camera and set them both to stream to panel, and they are not added to the NVR.

When I click cameras on the panel, I see that the BACK - N loads a thumbnail. The LAUNDRY ROOM says device offline (but its not).

I think this might have to do with the streaming quality being too high. Is there a way to find out the specs of accepted video by the 2gig? Maybe I need to turn down my settings a little. I tried to search google and stuff but no luck.

Once thing to try, if it hasnt been done at this point, is to select only 1 video device to be streamed to the panel.

Under Stream Video to Panel in Alarm.com disable all cameras. Wait 5 minutes, then select 1 camera (preferably not connected to the SVR) and try streaming to the panel.

hink this might have to do with the streaming quality being too high. Is there a way to find out the specs of accepted video by the 2gig?

As far as specs, nothing is listed by 2GIG but If we are able to locate that information, we will follow up.

Under Stream Video to Panel in Alarm.com disable all cameras. Wait 5 minutes, then select 1 camera (preferably not connected to the SVR) and try streaming to the panel.

Additionally, after adding only one video device under Stream Video to Panel, reboot the Edge panel (2GIG Logo > System Info > Reboot) . Once the panel has rebooted, test the live stream feature via Smart Home

No luck. Losing faith in the adc camera system. The SVR keeps losing camera connection too… It will either just be a black box or say no link… but the camera works fine in the app and on the website… which tells me it can’t be network related… plus I’ve checked everything network wise. its just bad at local streaming or something is set up wrong.

So that we can best assist, which cameras are you seeing this affect?

Functionality on the website and app means the video is reaching ADC, but LAN connectivity between the camera and SVR or camera and panel can be interrupted in ways that does not really affect remote streaming in the same way.

Can you provide which cameras and a few timestamps when you see the issue occurring?

Also, you mentioned an ATT fiber router, what is the exact model number of that router? That might help us look for any potential issues.

I just rebooted the svr and they’re all showing now. Next time it happens I’ll note the time stamp and let you know.

A few things…
I changed the quality settings down on each camera and it looks like the SVR is working as expected now and not dropping cams.

The panel is still not working with only one camera. I took a video but can’t upload video here. It tried to connect for about 30 seconds and then says device is offline.

If the video is small enough it can be emailed to support@suretyhome.com, otherwise you could upload to a video site and share link here. I can share with 2GIG.

If reducing quality settings improves connectivity that suggests bandwidth as a potential cause.

Here try this for the video of the panel:

As for the bandwidth, the bottleneck would have to be at the SVR itself, because, on alarm.com on the computer and in the app, I can stream all 16 cameras at the same time. Just to confirm this, I opened alarm.com on two computers and an iPad and I was able to stream on all of them with zero issues.

Network topology attached… sorry for the crappy drawing, I don’t feel like building out a Visio.

The SVR is connected to the same switch as the cameras, so theoretically, the traffic would never have to leave the local switch itself. 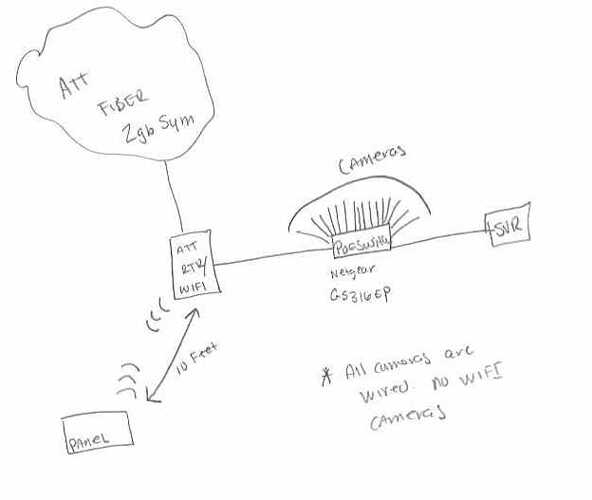