When getting wiring pulled through for the V721W camera, I stripped off the “connector” of the “Y” which separates the trigger wiring and power wiring. I am now left with three wires and the silver stranded shielding. Black/Red/Purple/Shielding Strands are the items. I just need to power up the camera. I am assuming the power wires are black and red, but wanted to be sure before I begin to experiment and connect power. I haven’t been able to find any documentation regarding the wiring of the camera. Any assistance would be appreciated. Thanks.

Hmm, was this done intentionally or accidentally? You should never cut into a camera tail, as that will void the warranty of the camera.

The documentation would not include the internal wiring, however we can try to get some details for you.

I have at one point repaired a V720W, the tail of which had been accidentally cut. If I recall correctly in that case, the “shielding” wire was actually GND.

Accidently…I know it did void the warranty. Thanks for anything you can find out…

Accidently…I know it did void the warranty

NP, just always like to verify that in case there are more cams you are working with.

What’s strange is that in the FCC database needed for approval…The FCC ID from the back of the camera is listed as a USB interface:

Not getting much useful documentation. While we wait, is the wire fairly mangled, or do you have the barrel plug end still with intact wire ends?

If so a multimeter can tell you which wires are which.

Insert one lead into the barrel plug and test resistance on each of the four exposed wires at the other end. The one with 0 resistance is positive (probably red)

Touch the outer metal of the barrel plug with one lead and test the wires at the other end. The one with 0 resistance is the negative wire (likely black or the stranded sheath)

Unfortunately, the end is mangled as it was stripped off above the splitter “Y”. 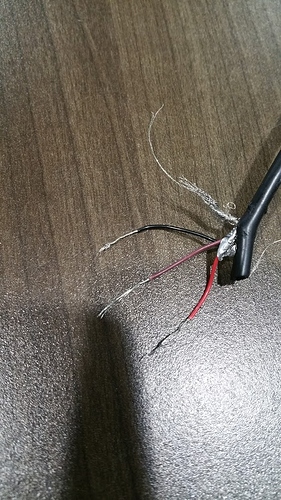 Looks like that’s the end that leads to the camera, can you post the other end which leads to the power barrel plug and IO wires?

I could not find that end unfortunately…

Well, tried getting some confirmation but the internals are not usually published, and once the warranty is voided it is deemed not serviceable by OEM.

That said, there are limited ways in which this might work so may as well give it a shot before replacing completely if you would like:

Have you already assigned the camera to your account? Plug in a patch cable between the cam and your router.
Try applying positive to red and negative to black. Plug in power, wait 3 minutes. Does power up occur?

If not, you can try positive to red, negative to the stranded bundle. Wait 3 minutes, does power up occur?