Woke up this morning and had 3 emails from surety, notifications that our front, patio, and side doors were opened at 2:15AM, about an hour after I went to bed and set the alarm. Looking at the history on ADC also showed our foyer motion detector being activated at 2:12AM.

Now the alarm didn’t go off, and our side door has a lock that is integrated into ADC and it did not show being unlocked. There is no sign that anyone was in the house, and the panel itself does not show these events.

So what happened? It is a pretty disturbing way to begin your day…

hmm, that is awfully strange.

I see the reports in history, four back-to-back events for the four sensors you mention. All the doors show open/close, without an extended period of being open.

If the panel does not register anything in history at this time, the only thing I can think of is that status from these sensors was delayed over the cell network somehow, or sat in the Alarm.com module buffer for some reason until a point in the early morning when they were finally sent. Neither of which should happen, but the reports in ADC are direct from the panel, so the most likely issue is that these represent prior activity before the panel was armed.

When was the last time these sensors were activated before that in the panel history? Could you post a photo of the panel history showing the times for last activity before 2:12? I’d like to try to match that with the rest of the ADC history. If they are missing, that would confirm the suspicion

Drat, I think my pic sizes were too big and my message did not post…

I do see a notification that the internet connected at 9:47PM last night, so maybe there was some sort of backlog. It is a dual path Wifi/Cell system, though, and I was online a lot yesterday and last night and did not see any internet problems, why would it have issues with both paths?

There is a long gap at the very end of the log between a motion detector activated (8:03PM yesterday) and an alarm event about 30 hours later. I’m not sure if that is a real issue or if alarm events just stay in the log longer. There should definitely be a lot of events in there between those two last ones.

The alarm event was also unusual. I came home when the panel was set alarm stay, and the alarm went off as soon as I opened the door, it did not give me 30 seconds to disarm.

Potentially these are more gremlins that are popping up since I did the last system update (previously posted about losing users).

Unrelated… Is there a way to get the panel to beep louder during the countdown to alarm? Even right next to the panel it is hard to tell you have triggered it sometimes. 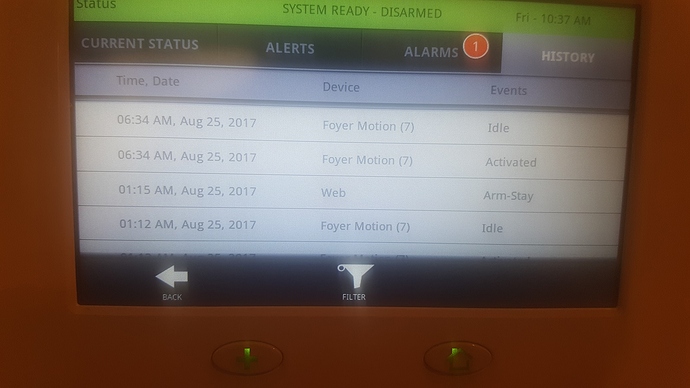 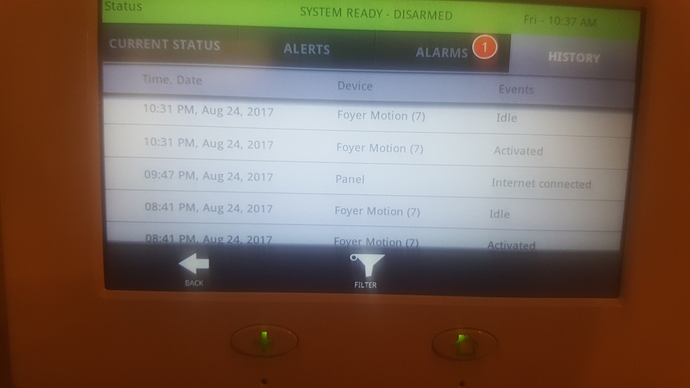 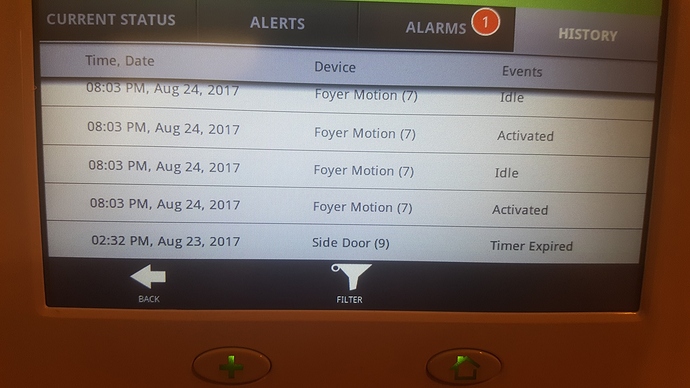 The alarm event was also unusual. I came home when the panel was set alarm stay, and the alarm went off as soon as I opened the door, it did not give me 30 seconds to disarm.

The system was armed with No Entry Delay. This would cause any Entry/Exit Sensor to act as Perimeter during the arming period. This is normal if No Entry Delay is used.

You may in fact be seeing some intermittent comm issues. The overall signal strength is very good so it may be more related to the panel. What makes me think this is that the sensor events from 8:03 and 8:41 in your images do not show up in ADC history. The rest match up.

Yes, plenty of activity is shown on all sensors between the alarm and the motion event at 8:03 in Alarm.com. The panel was sending those.

When is the last time you power cycled the panel? You should try that in this case. Restarting the panel processes would be good.

Also, do you see any firmware updates start if you attempt to download using network? How long did you wait after 1.6.3 was available until you downloaded?