I recently tried the Vivint service but cancelled using my ROR shortly afterwards after finding this website. Vivint failed to come back and pick up the equipment after they had scheduled two appointments. I have a takeover module and What I did like, was that the WIFI was working on the Skypanel and displayed the cameras on Vivint panel along with the application. One source to access everything with the Vivint application. I was not happy with their customer service and the rush job after signing the contract. I purchased a GC3 to try with some of the existing equipment and found that the only thing that seems to work is the items on the takeover module. The Door sensors are DW21R and the Window sensors are DW11 and the GC3 will not recognize any other sensors currently. I also have some glass break’s installed and they are not recognized by the GC3 either and listed as GB2 in the Vivint panel. I opened the glass break up only to discover it says Vivint inside on the circuit board. Seems most of the items installed are proprietary items used by Vivint in my home installation.
Has Vivint began to install their own proprietary items during the install? If so, this is more of a reason NOT to purchase their items and that cant be used.
Anyone have any idea what can be done for the items left behind?

Here are the sensors installed? I cant find any information except for on the Vivint site for them. 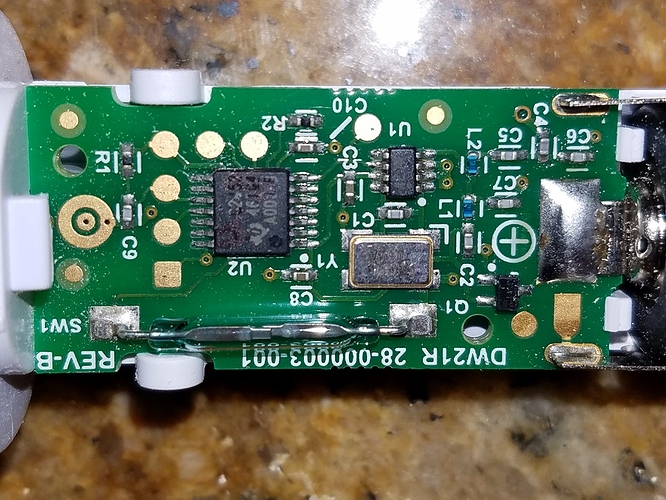 We have heard this reported before. This user ended up swapping them out.

They are given the -345 in their model number, so they are likely still 345 mhz sensors, though we cannot say with any certainty whether there is anything otherwise proprietary about the signal. I have not tried them myself.

Have you tried manually typing the serial number and testing whether or not any signals go through? Try tampering a sensor after manually entering the TX-ID. Any luck?

Do all the TX-IDs report a different first four digits?

I did try both options of the learn process and manually adding the TXID number without success. The GC3 did not pick up the signal in either attempt.
The TX ID’s are using the first four digits on many of the devices and different ID’s for the glass break and other devices such as carbon monoxide and smoke detector.I still have the original setup in place with the Skypanel Console installed and connected to the devices. It is my understanding that I should be able to add the existing sensors while the Skypanel is in place. I have not deleted a sensor form the Skypanel yet and tried to add it while not connected.

Removing a sensor from the prior panel should not matter at all, but may as well give it a shot. We do not have any conclusive info on 21/11 models, but they do appear to be 345 MHz sensors. There may indeed be something proprietary. The glass break has a different physical build it appears as well.

Regarding the removal of the sensor, I read the same also that it should not matter.
On the 21/11 models they are not listed on the 2GIG website so it could be a Vivint only product. I would hate to have to be forced to buy all of this new equipment if I can use what was left behind.

Confirmed with 2GIG that the 21/11 (models ending in 1) are proprietary and will not function with standard 2GIG panels. They will need to be replaced unfortunately.

Thanks for checking on this Jason. It will be bad business when Vivint install equipment that only works on their panels. Once you buy their equipment none of it will work on other devices. I do have so smoke alarms and Carbon Dioxide sensors that I have not tested but will report back once I have time tonight. too bad there isn’t a CyberMonday sale going on fro sensors right now. I will need to replace quite a bit of items today.

The Carbon Dioxide and Fire Alarm word with the system. I have ordered new sensors ro replace the door and windows. Hopefully, I can get my new system up this week once I receive my sensors.

The Carbon Dioxide and Fire Alarm word with the system. I have ordered new sensors ro replace the door and windows.

Thank you for confirming.

Is it possible to duplicate what I had using Vivint? I had a hybrid system using a takeover module for the wired connections and then sensors added to fill in the voids in the household. I also has 1 doorbell camera, three outdoor cameras, two Carbon Monoxide detectors and one fire alarm sensors along with their proprietary Space Monkey for video storage both local and cloud access.
I have the Door and Window sensors, three Alarm.com Cameras,one Skybell Doorbell camera, 3 glass breaks, and a 2GIG GC3 Panel all coming in tomorrow to replace the items that will not work on my current environment (Unsure about the cameras as I have not tried them but purchased just in case they don’t work now.)

Is there a device to allow me to use my existing firm alarm in my home as it works currently and it is a wired system.

If you are referring to interconnected AC fire/smoke detectors, the Firefighter is exactly what you are describing. It listens for the cadence of interconnected detectors and triggers an alarm on your panel.

Can the cameras be tied into the system so that I can display them via the alarm.com app? There is not very much detailed information regarding the actual setup and alarm.com application functions listed on the sites.

Alarm.com cameras communicate via your internet with Alarm.com and are viewable in the Alarm.com App and website. They do not communicate with and are not viewable on the panel. Sensor activity and alarms can trigger recording schedules though.

The Alarm.com SVR is a local recording server with storage you can customize. SVRs support up to four cameras and are viewed similarly through your Alarm.com App and Web login. Video service and SVR add-ons for service plans can be found at the bottom of this page.

When the WIFI is enabled on the GC3, have you heard if there will be the ability to view the video on the GC3 panel?

No, through the date of this post this is not available. To open video feed with a compatible SkybellHD video doorbell and Alarm.com, you simply need to tap the push notification received. Most will save credentials and not have to log in and out of the ADC app for normal use anyway. You can then set a quick pin code to access instead of typing out credentials.

I know there are situations where it may be beneficial, but in large part, having a static location where an interaction must take place I would not guess is a direction ADC would take. If history is any indication, I would expect to see continually improved smartphone control rather than point to point communication like doorbell to panel.

That’s not saying it wouldn’t happen, but I do not anticipate it at this time.

We do not have an ETA for GC3 firmware, but I have been expecting it around this time, so hopefully not too long.

I signed up online for alarm.com service. How long will it take to activate my account? Will I receive an email once it is active? Will they call me to perform a test or some verification process?

If you have purchased service with suretyDIY, yes. Once our Data Entry team has set up your account, you will receive a Welcome email with instructions on getting connected, as well as initial credentials for Alarm.com and testing instructions.

Thanks for the quick response.

How do i set my alarm to arm itself at 10 PM for example? I cant locate that feature in my setup.

Automated arming schedules are an add-on option for either Basic or Gold Interactive plans. They are typically used for commercial settings given the higher likelihood of false alarms in a residential system.

Add-on features can be found at the bottom of our DIY Monitoring features page.

If you would like to include an Add-on for your existing account, please request the add-on in a secure message to our customer service team or alternatively you can email customerservice@suretyDIY.com.

So I just wanted to pass on my experience with this topic. I bought a vivant gb2 glass break sensor to use with my 2gig gc3 panel. I was not able to make my 2gig “learn” the sensor. Not did tampering or pressing the test button trigger the sensor to the alarm. However testing the unit with simulated glass break did trigger the sensor and an alarm. So from what I can tell this sensor is indeed atleast somewhat compatible with the gc3 panel. I set it up as a “existing glass break sensor” and used the settings from a YouTube video to set it up. I had to manually enter the txid which was the last 7 digits. I hope this is of help to someone. Btw my glass break test was from a YouTube video of simulated glass breaking from a newer Samsung smart phone pressed up against the hearing sensor.

Another update I had to change the sensor from "existing Glass break to the “hw Glass break” to get rid of a persistent error. All has been good for 24+ hrs