Just moved into my home I want to remove my vivint doorbell and control panel without just ripping them off the wall but they lack removal tutorials on their website. Can anyone help? Particularly the doorbell. I dont want to compromise the wires behind it.

Couldnt say for sure without knowing which make/model is currently installed. It might be best if you posted pics.

The doorbell likely has a set screw holding the doorbell camera to a mounting bracket that is screwed into place. Do you see anything like that?

The panel would have something similar most likely, either a set screw at the top or bottom that allows you to remove the panel from the mounting back plate. The backplate is likely screwed into the wall itself. 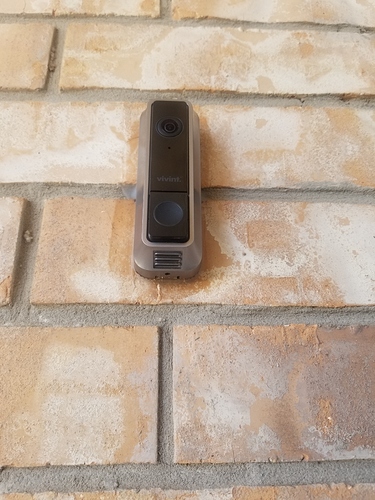 Cant tell from that picture but It looks like the previous model of doorbell camera used a Torx screw.

There’s a black mounting bracket that the doorbell is connected to) the bracket appears to have two screws that are attached to the brick.

I assume to get to those mounting screws to the brick I need to remove the face of the doorbell. It might be a torx bit to remove its hard to see in the tiny hole but I will give it a try

yeah the grey part (the doorbell itself) is attached to the black mounting plate. The plate is screwed into the brick. Removing the set screw should allow you to remove the doorbell.

you’ll want to lift it off gently to avoid yanking the wires, if possible.

Yes pulling the wires is exactly what I want to avoid I dont know how much slack I have behind this doorbell and Vivint support was horrible with giving info for the removal. The panel I removed but they leave a huge whole in the wall to sit the panel inside.

Got it off. Just for the record since the screw head is hard to see. Its a T5 bit to remove the doorbell face

Thank you for following up with the bit type, that will likely assist future users! Glad to hear you’ve got that removed alright.

Out of curiosity, you mentioned that a large hole was left behind the panel; if you don’t mind, how large is the hole you are referencing? Was this a Sky panel?