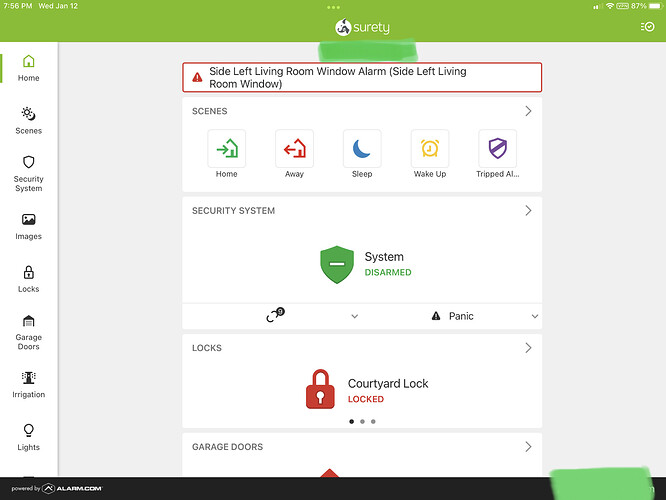 At 7:35 pm PST I sent a command through the surety portal to reboot my panel. It rebooted and then my neighbors who are on my notification got texted stating an alarm was in progress as the left living room window was triggered (a window we never open)

I went tomthe iPad app and it said alarm in progress. I cancelled from the app.

I called dispatch and they asked of itmwas the “medical alarm”. I said no itmwas the living room window. They stated they received no alarms. Why did they ask about the medical panic alarm?

My instructions are to dispatch police first. Why did they not get the alarm?

What happened in this situation. I am concerned that people on my notification list were notified but your central dispatch never was alerted .

Also, I have rules that go off when alarm is triggered (e.g. lights in multiple rooms go on.). None of this occured.

The history on this is exceptionally odd. It is referencing partitions which your system does not use. This looks like it was an ADC bug or a very odd panel processing error after the reboot. There was likely no actual event.

Even if there is nothing, send a screenshot of the history on the panel so I can send to ADC and confirm no actual alarm occurred. They need this to escalate.

My system never alarmed. Itmwas not even armed.

How will we resolve this. False alarming seems to have been an issue before and I am concerned about it

I never opened the water valve either.

I need the panel history. I cannot use Alarm.com history.

On the panel go to the History events page and take some photos of the events there around the time of the alarm.

I never opened the water valve either.

It looks like after the reboot, your panel sent a flood of signals. Some of the data doesn’t make sense. I am working with ADC to determine what exactly caused it, but in order to do so, we need the panel history image. It is quite possible that the panel bugged out here after the reboot.

As our recall , We have had a flood of signals with my lutron shades and door locks any connection here?

Those are before the event, can you send a photo of the next three events above those too? I’ll need everything before and after to show the panel has nothing at that time.

There is no reason to expect correlation to previous issues in this case, it looks like a unique occurrence. Some of the data sent by the system doesn’t match current system info. As though the panel may have sent really old data from the buffer. Just a guess though, I can’t confirm anything until ADC investigates. 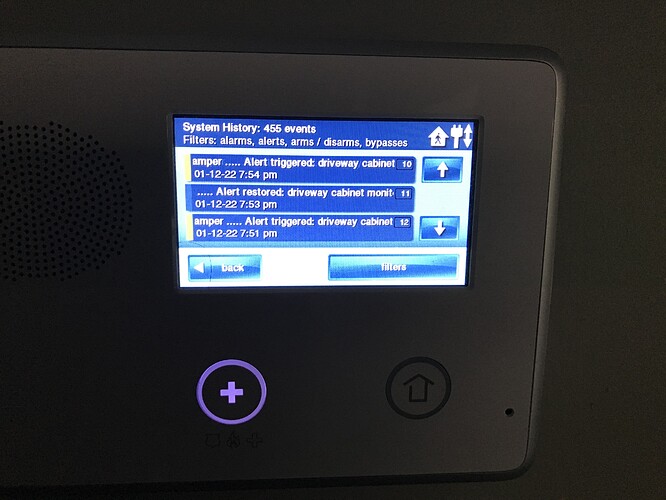 Nothing relating to the alarm.

Thank you, yeah I actually expected to see nothing, I just need the photos as proof for ADC.

My system has been acting strange for months. If you search my username, I have posted on some of the incidents in the past

I have the 2 gig brand signal repeater.

Do you think this could be part of the problem?

No, the repeater would have nothing to do with this errant signal.