So Qolsys had to send me a new IQ2 because I had the older version which could not be upgraded. This IQ2 is running 1.5 software. My main IQ panel is running 1.5.3.

Here is the problem: whenever I arm AWAY from any cell phone, the IQ2 panel gets stuck at the point where it shows the 60 second countdown timer, but it never starts counting down. It stays like that forever. As soon as you touch the screen, it asks for your password or the alarm will sound soon. So you cannot look at the status of sensors or anything while armed away because as soon as you touch the screen it wants a password immediately and basically forces you to disarm the alarm. It doesn’t matter which part of the screen you touch. I have done a master reset on the IQ2, deleted from main panel and re-added. Still getting the same behavior. It acts just fine if I arm STAY either from the IQ2 or from a cell phone. It also acts fine if I arm AWAY from the IQ2 panel. The only time it does it is when arming AWAY remotely which is a royal pain because that’s how I re-arm from my phone after I leave for work at 4am while my wife is still asleep in the bedroom. Has this behavior been witnessed before? Any thoughts?

I’ve attached a screenshot of the frozen countdown timer on the IQ2. 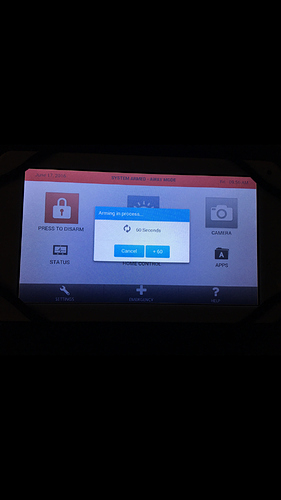 Has this behavior been witnessed before?

To my recollection, no. That is very strange. What’s more interesting is I was able to recreate it first try. From a web command.

It’s very odd because a remote command should arm the system immediately, no countdown. The IQ panel properly responds that way, but the IQ2 seems to by default generate the countdown window when an Arm Away command is sent, but no countdown is occurring on the primary panel.

Well, makes it easy to send to Qolsys. I have to imagine it’s been previously reported, being so easy to recreate. I’ll see if they are already addressing it

When you say new IQ2 do you mean the older tablet IQ2 or the new wall-mount IQ Remote (aka “new” IQ2).

I had horrible horrible stability problems out of the IQ2 for months, I used to have to reboot the damned things almost daily… out of desperation and after a couple months of working with Qolsys tech support directly, I got my hands on the new wallmount version IQ Remote which is mostly the same but there appears to be some minor hardware differences because both mine are stable now for several weeks.

Unfortunately I didn’t run into what you’re seeing. My problems were related to IQ2 losing connection to wifi, losing connection to primary IQ panel, or simply locking up. Qolsys mentioned that there are a lot of fixes in 1.6 but it doesn’t seem to have been released yet.

Unfortunately I didn’t run into what you’re seeing. My problems were related to IQ2 losing connection to wifi, losing connection to primary IQ panel, or simply locking up. Qolsys mentioned that there are a lot of fixes in 1.6 but it doesn’t seem to have been released yet.

Sorry it took me so long to respond. I suppose I forgot to check the notify me with replies box. I didn’t think anyone had responded. Yes it’s with the older tablet version of the IQ2. Is Qolsys working on a patch for this? Thanks Jason.

Yes, Qolsys was able to replicate and are looking into the issue. Not sure if it will get added to the next firmware, or be a separate update.