That would indicate that secure command class enrollment was not completed locally. To ensure success with pairing Z-wave locks:

Looks like those files were too large, could you resize and post screenshot of the error messages you see during the process?

If you are having trouble resizing the photo, yes, send an email with the screenshots attached to customerservice@suretyDIY.com. You can reference this thread in the email. 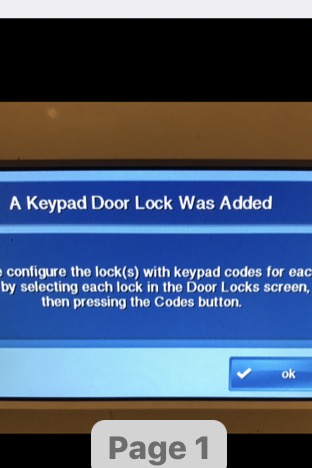 Can u see that pic

That message is not relevant to any secure enrollment issues. Secure enrollment is an automatic process that does not require any code input. It is done during the learning process. Can you confirm you performed the steps outlined in the original response? If they are not followed, if you try to add the lock without it being within a few feet of the panel for example, more often than not problems will occur.

If the above steps were followed, what is the model number of the lock you are trying to add?

Technically no, I do not think that affects the Kwikset 910 from being able to be learned in. It might be worth a shot to try though.

It would be good to reboot the panel prior to trying again to pair the lock.

Make sure the lock and the panel are 5 feet apart, remove the lock, and leave it removed for at least 5-10 minutes. Allow the device to clear from the Alarm.com device list first before re-adding.

After 5-10 minutes, power cycle the panel, unplug the power supply first, then unplug battery, then plug in battery and plug in the power supply. After it boots up, at 5 feet away, pair the lock to the panel. Do you get the same result?

Is this a new lock with new batteries? It may be good to try new batteries to ensure strong transmission if there is reason to believe the current ones may be low.

If the pair procedure steps are being followed and the same result is occurring, it may be the lock itself which is causing the issue. Is this a brand new lock? Are you able to try a warranty replacement?