I switched to Surety from Vivint last November, which involved purchasing a new cell module and updating the firmware on my 2GiG panel. At that time I had some concerns that I may have damaged the battery connector during the process, however, I restarted the panel and did not have a low battery indicator so I thought everything was fine (and it was for over a month). However, in mid-December I got a low battery notification. Since things had been working fine for over a month, I thought it might actually be a bad battery pack. So I ordered and replaced the battery pack (and restarted the panel by removing the AC power, then replaced the battery pack, then reapplied the AC power). I’ve tried power cycling the panel in this fashion a couple of times and waited several days to see if the battery needed to charge, however, that has not resolved the low battery indicator.

What do you guys think my problem might be? Are there other things I can try or do I need a new panel? I don’t really want to have to buy a new panel, but if I do have to go that route can my programming be backed up and restored so I don’t have to re-program everything?

By the way, I have nothing but positive things to say about the service I’ve received from your company… you guys are great!

Thanks in advance for the help,

What caused you to think this? Can you provide a photo of the connector on the panel or a description of any damage?

Have you tested the battery pack to determine if it is truly low? (multimeter to test voltage)

Is the low battery icon on the screen now? The last battery alert I can find in history occurred 1/25/2016 showing the battery ok. No current low battery.

Can you provide a photo of the battery icon now? If your panel screen reports something different than what it sends to ADC then that indicates a different issue. I have actually once before seen a panel show low battery repeatedly on perfectly fine batteries, (the issue was resolved with a reset to defaults, backup-restore)

My concerns were that I had a difficult time removing the battery connector the first time and I didn’t realize that the panel wasn’t designed to start upon plugging the batter in with the AC disconnected. You guys told me that since I wasn’t getting a low batter indicator that everything was probably ok.

I don’t have a multi-meter, so I haven’t tested the battery pack.

The low battery icon is on the panel (along with the alert symbol for an ongoing error). I’ll take a picture and send it once I get home. It re-reports the warning each time the panel is rebooted.

I restarted the panel (by changing programming), the alert sounded again when it started. Pictures attached. 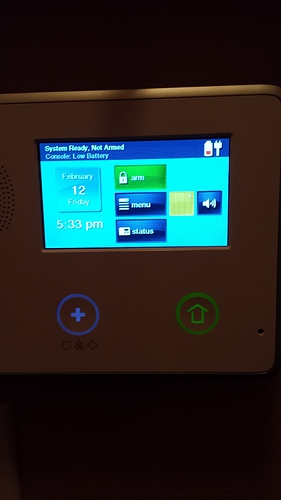 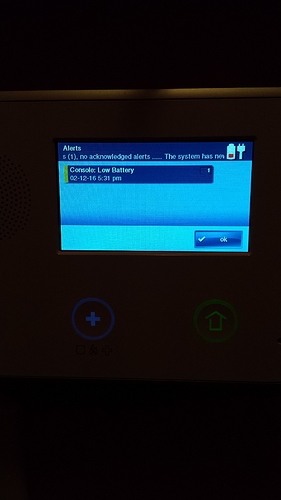 First thing I would do is verify both packs are not bad, and then go from there. the batteries used in the packs usually have a shelf life of 3 years or so (less if heavily used). Batteries with a date of 13XX (e.g., “1312”), are at/near end of life. If you are buying a battery pack, then get a 2GIG-BATT2X, with a date code at least “15XX”

Just because you bought a “new/unused” pack, doesn’t mean it is actually any good. Check the date code.

You can also test it by easily making a battery pack using 6 AA rechargeable batteries (Energizer/Duracells NIMH), and wire in the lead from the old battery pack, and some electrical tape. Be sure to charge the batteries initially prior to making the pack/plugging it into panel.

There are some videos on youtube that show you how to make a 7.2v batterypack by gluing the batteries together, and using solder and flux to connect the poles. I don’t have a soldering gun, so I have made packs using electrical tape to hold it together and wired/taped the poles, and connector wire plug leads.

I restarted the panel (by changing programming), the alert sounded again when it started. Pictures attached.

Curious, did you receive an Alarm.com notification reporting the battery is low? Or did it just announce this on the panel? I do not see it reported

I do not see it in history. Is it currently reporting low battery?

I see both tamper and low battery selected for notifications. Can we test something quick?

Try power cycling your panel to get the low battery alert again, wait a few minutes and see if a notification from ADC is generated.

Then try tampering the panel quick, no need to leave it open long, and see if a notification is generated.

I went back and checked all of my email notifications for CS alerts related to this and here is what I found. I did show that the last notification in both cases was “Low Battery”, however it seems as this is only being reported to the CS when another alert is generated (Tamper) in both of these cases.

I also picked up a multi-meter to test the battery. The original battery had a date code of 1402, it is outputting 7.6 volts. The “new” battery had a date code of 1423, and is outputting 4.47 volts. When AC power is removed from the panel with either battery, the panel shuts down, so the battery backup is obviously not working with either of them. I left the original battery installed since it is outputting more than the expected 7.2 volts and the “new” battery was not.

I’m also attaching a couple of shots of my panel and the battery connector. 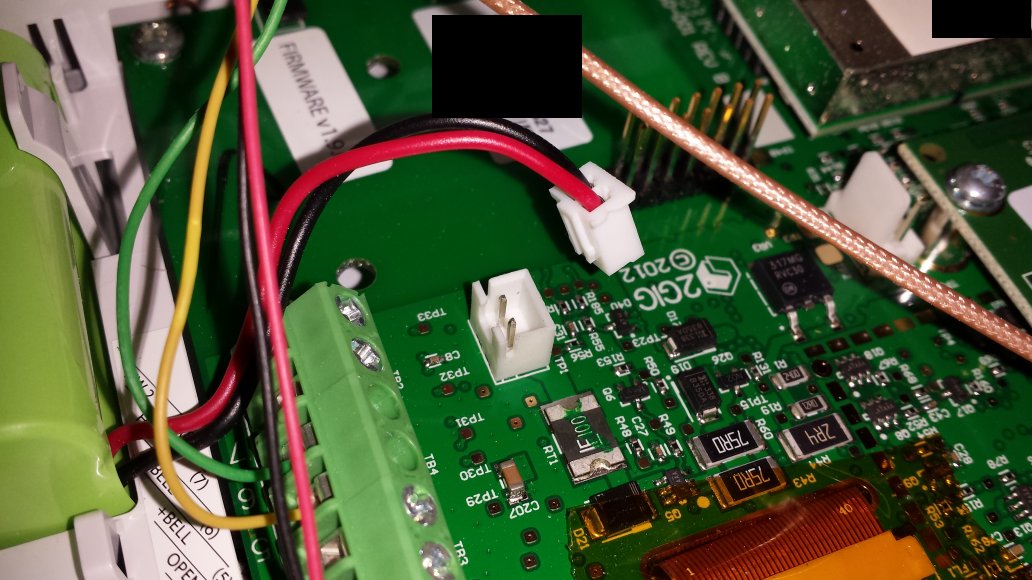 What happens when you connect the battery pack indicating 7.6V and then disconnect the AC wall transformer?

Does the panel power off, or continue to be operational?

My guess is you damaged the pin connector, and/or motherboard, and your panel either can’t see that battery or can’t charge the battery. You will most likely need to replace panel in any event.

At 70 degrees F (20 C) NiMH batteries will lose up to 40% of their charge within a month. If they are stored at a higher temperature, they will self discharge at an even higher rate. If your panel can no longer charge, this may indicate why it took a month for your low battery trouble.

To properly test the battery pack, you should do it under load.

If it is a result of physical damage, it would necessitate panel replacement. This is likely the case. The original low battery alert had never been cleared, which is why additional alerts were not generated.

It may be beneficial to try a panel reset/back-up recovery before switching panels. This would rule out a rare issue with battery reporting.

To clarify, your panel powers down as soon as AC is unplugged, even if the 7.2 V battery pack is installed?

Make sure you are plugging in battery before AC.