I would like to control (open/close/status) my driveway gate. Currently I have a LiftMaster system and I can use my one remote to open the gate and the garage door. So I’m thinking that if I pair the 888LM to the gate box, it would then communicate to the 828LM. I don’t need the button for the 888LM really, but It might be nice to have one in the house so you can open the gate before going outside. My only concern is that the 888LM replace the receiver on my gate?? or is the 888LM like a remote and I would just “pair” it to my existing receiver?

So you have a Liftmaster Gate Opener that uses the same fob remote as your overhead and want to use the gate on a MyQ system? Would you be able to provide the model number of the gate opener? I’m intrigued and would like to know if there would be a solution myself. I am guessing (without speaking to Liftmaster yet) that the 888LM may not be able to directly interface with the Gate opener, but I could be wrong.

I have a BFT gate motor and receiver. Which did NOT work with my Liftmaster remote. It annoyed me, so I had a gate company come out and they wired in a Liftmaster 312HM secondary receiver. Then they were able to pair my existing liftmaster remote with that box, which then in turn tells the BFT via hard wire to open. It works great. 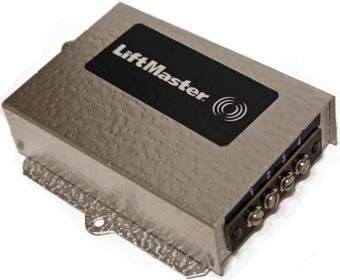 I have a LiftMaster 312HM secondary controller. It then tells my BFT controller to open. The owners manual for the 312HM has this diagram in it…Does this mean I would connect the 888LM to 3 & 4 on the receiver as a “wall button”??

Google 312hm manual if you need to see the whole thing, I don’t think I can post links here. 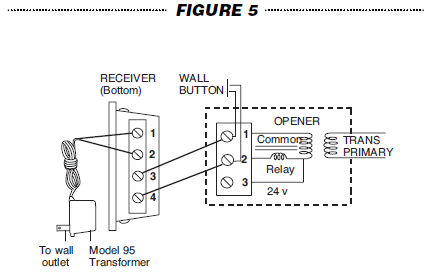 The 888LM I believe will only function with a MyQ compatible overhead.

At first I thought this sounded like a custom 821LM scenario but I am told by Liftmaster that you would not be able to control the gate with only the Liftmaster receiver, regardless of model.

However, there are models of Liftmaster Openers that are directly compatible they say with the 828LM gateway.

Based on your drawing I would think that your assumption is right, so if the 888 can activate and pull status off the receiver that would work, the Liftmaster Rep stated that it wasn’t possible with just the receiver, so I am doubtful, but it may be worth trying if you don’t want to swap the whole opener.

I wonder if the receiver will report status…? I guess I’m going to have to try and see. I would really like to have the 888LM in the house so I had a button to press for the gate, but I guess it will just have to go in the box since the wiring doesn’t go into the house.

As long as you are not referring to a metal enclosure it’s worth a try. (if it is metal it’s possible you’ll run into signal issues)

Just make sure wherever you get the 888LM has a return policy for open box items.

Well, no go. I connected the 888LM to 3&4 and it did not power on. obviously the button didn’t work without power. I checked the voltage and it was like 30v.

Replacing my motor with a new one isn’t an option. So there’s nothing that will allow me to remotely control it?

A Mimolite would probably give you remote control of your gate.

You could configure the relay output to be momentary (instead of latched) and add it to your 2GIG panel as a Z-Wave light switch. Wire the NO1 and COM1 terminals (normally open output) on the Mimolite to the wall button input terminals on your gate opener. Then when you activate the Mimolite by “turning on the light” it would effectively “push the button” on your gate opener just like you had done it with your own fingers.

As always, I can’t guarantee this would work as I’m not able to test it without your gate opener but it seems promising. It would be best if you kept the Mimolite in your house or garage and ran a wire to the gate opener as the Mimolite would need to be within range of your Z-Wave network.

I could take my old regular button and hook it up to see if that even works before trying a device. I’m not sure how the 312hm works as a secondary device (meaning it might be a hack itself) so verifying a button works period might be good. I’ll try that tomorrow.

After looking at the wiring diagram, I think this might work. I also like I can add a magnetic sensor. Which do you recommend? I think I saw a thread a few days ago where someone found a new outdoor specific gate sensor?

Looks like Linear makes a similar product, the GD00Z-4.

Looking into this got me thinking about something else. Do you guys have the ability to make a non MyQ device like this appear in the garage door list and not as a light switch?

I don’t have detailed information on the GD00Z-4 and how it behaves in a Z-Wave network but I think it might not work. From the manual it says:

The Mimolite works be acting as a Z-Wave “binary switch”. 2GIG treats a “binary switch” as a light switch. I’m not sure whether the GD00Z-4 will act as a Z-Wave binary switch or whether the 2GIG panel and Alarm.com will treat it as a light switch. I’m sure 2GIG has plans to support the GD00Z-4 but I haven’t heard that they do yet and I know Alarm.com does not have plans to support it as a garage door opener.

Well, hooking up the regular garage door button as they have it in the diagram not only didn’t work, I blew the fuse on my gate controller.

I guess I’m just going to monitor the status and I’ll get a MyQ motor in the future. I’m a bit bummed.

I don’t see how connecting a simple wall button as shown in the diagram would blow a fuse in the gate opener. It might be worth a call to Liftmaster tech support or your gate company on that to figure out what’s going on. It looks like it’s supposed to connect to a wall button.

Have you tried removing the device and re-adding it?

The Mimolite is not listed as being compatible (a complete list of tested compatible z-wave devices can be found here) so there may be functionality issues. I have reached out to Qolsys to confirm and will follow up here if I can get more information.