I have a 2gig wireless smoke alarm/heat alarm that will not stop chirping 1 time. The batteries are new. I also cannot login because I do not have the installer code since we bought the house a few months ago and it was not given to me. Please help me figure this out.

The installer code would be defaulted on a 2GIG Panel upon signing up with suretyDIY and getting first connected to service. This can be found in your Welcome to suretyDIY email.

If you have an SMKT3 Smoke Detector, there are three possible causes for chirps, and you would determine which is the cause by the delay in the LED flash:

How long between blinks on the LED?

The smoke alarm/heat sensor Blue his every 4 seconds and flashes every 45. So I assume it is contaminated, but this problem just started and has been attached to the ceiling in the basement. It just got new batteries last week. Can I clean it somehow? Also if I get a new one do I have to link it with my panel or does it connect automatically?

If you see a blink every 4 seconds this is a general sensor fault, not a dirty sensing element. A blink every 8 seconds indicates contamination.

A general fault is typically a hardware/sensing element failure. This isn’t common, but becomes a bit more likely the longer it is installed.

To replace, you would need to program a new SMKT3 sensor into your panel, it would not listen for the new sensor unless you added it to programming.

You can find an installation video on the SMKT3 here, along with step by step programming.

I have another detector that quickly flashes red then red then looks like green twice after. What does this mean?

I have another detector that quickly flashes red then red then looks like green twice after. What does this mean?

What model of sensor are you referring to?

This is the model. 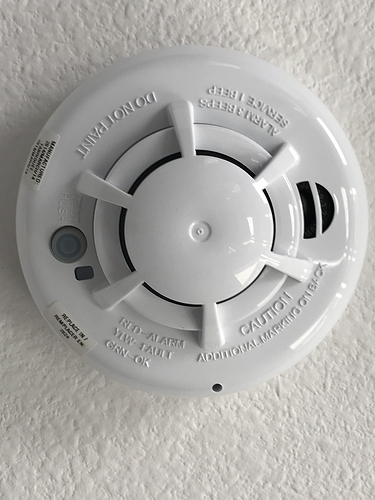 That is an SMKT3. Are you saying you have two different SMKT3s? Or is that the same sensor you were just referring to originally?

Note there is only one SMKT3 programmed into your panel currently based on what the panel is reporting to ADC. If you have more than one sensor, you’ll want to verify which is connected. This is pretty easy to do by tampering the sensor.

The other can be learned in by following these instructions.

Yes it is a second sensor. If this model is not connected, it will still sound an alarm, correct?

I already ordered a new sensor for downstairs because of the LED indicating contamination.

Yes it is a second sensor. If this model is not connected, it will still sound an alarm, correct?

The sensor itself has a built in sounder, but if not programmed to the panel it will not trigger the panel siren nor any monitoring response.