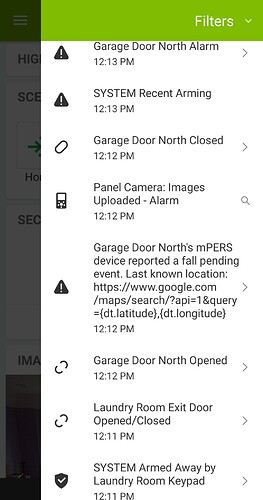 I would go in and check the settings for that sensor

This would generally be the result of a sensor programming issue.

The timing of the alarm is normal. It occurred after 60 seconds after arming, the exit delay on the system is 60 seconds per your panel configuration reported to ADC.

Right now I am not seeing any outward issue with that zone programming, but ADC is reporting that data was uploaded from the panel last night, I wouldn’t be able to see the issue if changes were made. Did you make changes to the sensor programming since this occurred?

No, not to those sensors. Last night I only added an additional keypad to th system.

The other thing is that you say that the exit delay is reported as 60 seconds, but the exit door to the garage and for and the tilt sensor are programmed to be long exit delay at 120 seconds. I double checked that just now on the panel.

Right, I’m saying it occurred after the normal exit delay, suggesting the zone is not being treated as the zone type you mention, which would typically suggest a programming mismatch somewhere. Can you send me a screenshot of that sensor programming on your panel via private message just to be sure it matches what I see in ADC?

If you place your account on test mode through our System Manager then try arming and opening that zone again between 60 and 120 seconds from the arming, do you see the same issue?

If you then arm, wait longer than 120 seconds, then open the door, does it function as expected?

How do I send a private message? (I’m new to Surety and haven’t done that yet)

You can use the Private Message Surety button in the top banner, or you can just send one by clicking on my name here and then select message.

I sent the private message with the screenshots. If I arm away the laundry room door to garage gives me 60 seconds only to exit to garage. After 60 sec. if I open the laundry room door entry delay becomes active and I have to disarm or alarm sounds after 90 sec. Opening the garage overhead door during the exit delay of 60 sec. extends the delay to 120 sec. counting from when the system was armed, not from when the garage overhead door was opened. Not sure if it makes any difference but I’m arming the system through a ws9lcdwf9 keypad.

OK, thank you, I believe I see the issue. It looks like it is not anything in the panel, but rather how Alarm.com has those sensors categorized. Currently they are listed with a device type of “Orientation” which seems to be assumed as a fall sensor, and I am not able to edit it. Looks like a default assumption made in the software based on programming from that panel.

I will have Alarm.com address this on our end. It should not require additional troubleshooting or any changes on your end, but I will follow up here with any additional info and confirmation.

Ok, thanks, that resolves the sensor type issue. What do you think about the laundry room door being programmed for long delay but giving only 60 seconds to exit? Also I’m still not sure what caused the alarm that day… was it the supposed “impending fall” or was it a problem with an incorrectly short delay period?

What do you think about the laundry room door being programmed for long delay but giving only 60 seconds to exit?

The panel is armed with a default 60 second exit delay. The “Long Exit Delay” extends the time for exiting and closing up that entry zone, but the sensor must be opened within the 60 seconds or else the panel will simply be in an armed state already.

Also I’m still not sure what caused the alarm that day… was it the supposed “impending fall” or was it a problem with an incorrectly short delay period?

It looks like the first door was opened just after the 60 second exit countdown ended, or was not yet closed by that time, and the second door, the “impending fall” that was incorrectly labeled, is the alarm event. There is clearly a bug in this case with how the tilt sensors are reporting. I do not see any reason the tilt sensor should have reported that way, and I see it referenced as a “fall” event when it opens in other areas of your history.

I am working with ADC on this to determine the ultimate cause. This may require changes on their part or in Qolsys firmware.

Also can you confirm whether the same issue occurs on the other garage tilt sensor? Can you test opening that other tilt sensor while armed?

Thank you very much. I spoke with Qolsys yesterday and they are investigating this. Looks like a bug with either that model or with Tilts and long delay sensor group.

To confirm, when you open the garage door when the system is armed, you immediately hear the siren, right?

If you change the group to normal entry delay (group 10) does the same thing happen?

I have been trying to recreate this on my own system, but I have not been able to.

I apologize but I misspoke before, a bit turned around based on the description of this error.

What you are seeing with the garage door extending the time is normal, but the result of a different setting I would expect. The Auto-Exit Delay Extension setting.

With Long Exit Delay, you should just be seeing 120 seconds as the exit delay if you have any sensor group 12 sensors.

If you open just that Laundry room door twice during the countdown does the time extend by 60 seconds?

I am trying to see if Qolsys knows the potential cause here, or recreate a combination of settings that causes this, but it seems like it is a bug. Combined with the mPers reporting, something is definitely off. I have uploaded panel logs to Qolsys so they can do a deeper review of what is going on.