-internet connection to router: got an error but seems to be able ping panel
-new network test option: show lan as green, internet as red and back-end as green
-image sensor was reverted back to testing mode

these are my initial findings…

panel seems to work much faster in executing z-wave commands

I noticed a bit quicker response too.

This would likely just resolve when the next update is sent (they are daily) but check again now, we sent a weather command.

internet connection to router: got an error but seems to be able ping panel

We’ve noticed a couple of authentication errors when first attempting to connect and perhaps an issue upon expiration of the DHCP lease. Try setting a static IP.

Weather update is back…

made it static IP, seems to work.

Remote temperature sensors are working too!

Also, I think I have wifi working, how can this be verified?

OK LAN shows green, internet red and backend green. What does it mean the internet is red?

Logically I would expect Internet success to be a given when Back-end connection is successful. Can you provide a photo of the test result showing what you describe so we can shoot it over to 2GIG?

I can still confirm that broadband pings from ADC are being acknowledged by your panel. The “Internet” test is not defined in any documentation I’ve seen so it could be that it is trying to confirm access by pinging a specific server, perhaps one of 2GIG’s? 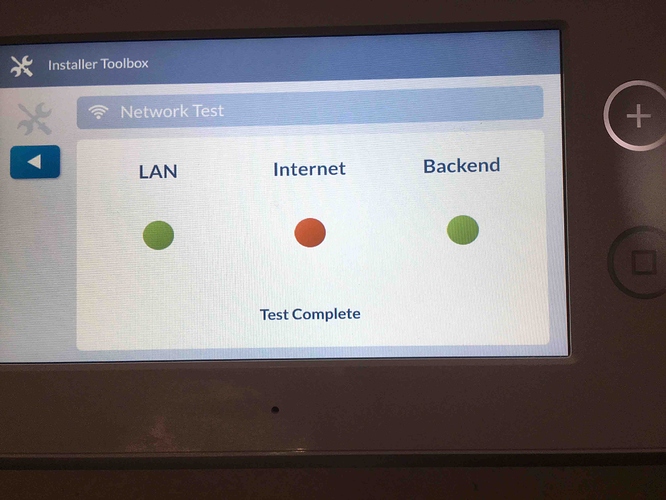 Thank you, we’re checking with 2GIG for confirmation. Unfortunately updated versions of the manual reflecting the latest firmware changes are not available.

I’m getting all 3 green buttons on my end.